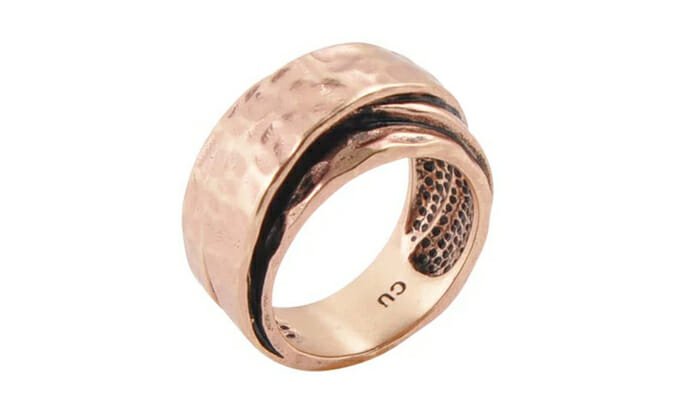 Copper is not a mineral but a part of the periodic table. The healing properties of Copper is too many. It is a smooth, pliable metal with high conductivity. Natural copper veins are found worldwide, and with intensive industrial use, this element is especially in demand. It was first briefed by Pliny the Elder in 77 AD. It was named after the Greek word “cyprios” about its original discovery in Cyprus (an island nation off the Middle East).

Copper is a critical component of other minerals, such as turquoise, malachite, nepheline, and copper blue. Copper is found worldwide, with major deposits in Mexico, Egypt, North and South America, Congo, and South Africa.

Copper is one of the most commonly used elements in our society. You are most likely in a room with various copper elements. In addition to hydraulic, technical, and medical applications.

Wearing Copper on the body is believed to penetrate the pores and help with arthritis. Copper miners were miraculously protected from joint pain in Finland, a common medical problem among local Finnish miners. Werner Hangarter, a German physician, fell in love with this phenomenon and studied the effects of Copper on the body. Werner and his team have developed clinical studies showing positive results in the treatment of rheumatoid arthritis along with neck and back problems.

One of the oldest medical documents known to man is the Edwin Smith papyrus. The text was acquired by Edwin in 1862 and is estimated to be from the Egyptian civilization of 2600 BC. This extended medical diary contains detailed diagnoses, treatment, and postoperative procedures. Copper has been identified through petroglyphs as the primary tool in various aspects of ancient medicine in these papyrus pages.

Cooper has been suggested for sterilizing wounds and drinking water. The green powder was created from a copper-bearing mineral (malachite) used during various medical procedures. Even more fascinating is that the researchers believed this text was a copy of an even OLDER medical article! One can only wonder how these societies could have been so advanced a long time ago.

As we pointed out earlier, Copper is a healer of the physical body and the auric. This healing element is used as a conduit within the crystalline grids, orgone pyramids, and your magic. Copper strengthens our entire emotional field and properly anchors the higher vibrations around us in the physical world. He can help us manifest our most authentic desires while at the same time bringing universal knowledge. Copper’s unique ability ignites our true inner potential and connects with our will.

When these forces are aligned, the radiant light within us can break through to bridge the void between the spiritual and physical kingdoms. Try placing Copper on a chakra that seems to be displaced and affected by evil energy. Damping the leading energy producer in our body can change our moods, emotions, and livelihoods.

We recommend that you quickly examine the physical body before embarking on any meditation. See what may seem strange and use Copper to resolve internal conflict.

Copper is one of the most beautiful metals in the package with its gleaming brilliance and brassy color. While Copper is often synonymous with everything industrial, from electrical wiring to the penny in your pocket, Copper has a wide range of healing properties. One of the most amazing things about Copper is that it is the third most abundant trace mineral in our bodies, profoundly bonding with the soft, sparkling mineral.

Copper has a long record with the world at large. Tracing the lineage, Copper first appeared in the known world in 77 AD. under the Greek name Cyprium, a reference to the land where malleable metal was mainly mined. Then the name was changed to Cuprum, and then to the character we know – Copper. From folklore to finance, Copper has accompanied us on a beautiful journey.

It was associated with the goddess of love (Aphrodite) and Venus in ancient times. It was polished to a shine and then used as mirrors. In Rome, intoxicating pieces of Copper were used as coins, and the Egyptians utilized Copper to purify water and keep wounds clean. Despite its long association with caring for the wounded and casting in India to create surgical instruments, it wasn’t until the 1970s that the United States began to recognize Copper’s healing properties.

An incredible energy booster and conductor, this warm mineral has matured to help you de-energize and create a positive vibe. Copper is found in many gemstones, from malachite to turquoise and chrysoprase.

Michigan (United States) produces one of the most significant quantities of Copper in the world. Almost all Copper is mined in the Upper Peninsula, often referred to as the “copper zone.” Commercial copper mining began in the mid-1800s and at one point produced almost 95% of all U.S. copper. Native Americans understood the true strength of Copper and had been mining it near Lake Superior since 5000 BC.

What are High Vibration Crystals, Exactly?

These dates have been confirmed by molded wooden logs inside the pit, which are believed to have been used to build shafts. An estimated 1.5 billion pounds of Copper was mined during this period.

What are the Benefits of Wearing Copper?

With powerful healing properties and a great conductor of energy, wearing Copper offers a wide range of generous benefits for the body, mind, and soul. It is believed that Copper, with a wide range of vibrational frequencies, provides a harmonic connection between the physical and spiritual worlds. It can amplify energy transfer, which means the wearer can absorb every ounce of healing when the metal is combined with healing minerals or crystals. Copper not only has excellent physical healing properties, but it also helps to balance the chakras and keep the blood flowing.

Say yes to harmonious health by welcoming Copper into your world. Always in tune with the flow, one of the leading health benefits of honey is its ability to improve circulation and oxygenation. When the blood flow is high, you will feel a brighter surge of strength and a sharpening of the mind.

Copper boosts copper levels for those battling anemia and low red blood cells, keeping you healthy and ready to fight internal diseases that damage your immune system. Copper also reduces joint stiffness, aches, and pains commonly associated with arthritis and rheumatism. Copper also aids in collagen production and can stimulate the system to overcome problems that cause skin conditions and rashes.

Copper brings healing effects in the physical sense and has rich spiritual healing and metaphysical properties. As mentioned before, Copper provides a bridge between matter and spirit; as a terrific conductor, it also means it can transmit light and guide the higher beings and celestial bodies to those who are ready and willing to receive. Copper can help remove negative energies and balance the chakras, so you can be well receptive to all the benefits the spiritual world offers. When we are willing to accept all that the universe has to provide us with, we make room for deep healing, cosmic greatness, and plenty of opportunities along the way.

An excellent balancer of emotions, Copper is an indispensable playing card when it comes to mental well-being and emotional healing. This sweet, glowing metal invites you to shed all your mental stress and boost your self-esteem through the power of its high vibrations. Copper can help re-awaken the senses and bring you to a place of perfectly groomed mental clarity for those who have struggled with feelings of apathy, feeling lost, or slipping into passivity. On the other hand, if you have been restless, excitable, and usually feel the OBJECT of things, Copper can calm you down. It is a healing metal that knows precisely what you need and will take you where you can find that space and that softness.

Copper is here for your success; he wants you to shine in a thousand beautiful ways and will do the work of vibrational energy to eliminate negativity and lead positive and powerful thought patterns so you can get where you are going.

Hi, My Name is Amida Lui. I'm the chief writer for Jewellio. Predictability, ideals and aspirations drove my life, yet the world of gems was my heart's real constant. I'm a gem obsessed especially with birthstone jewelry and always dream of Alexandrians and emeralds. I'm continually looking for the next brilliant thing. Follow me on trends in gemstones, birthstone jewels, jewelry designer profiles, and new wear options.
History

The Complete Guide to Pink Spinel Meaning, Properties and Power