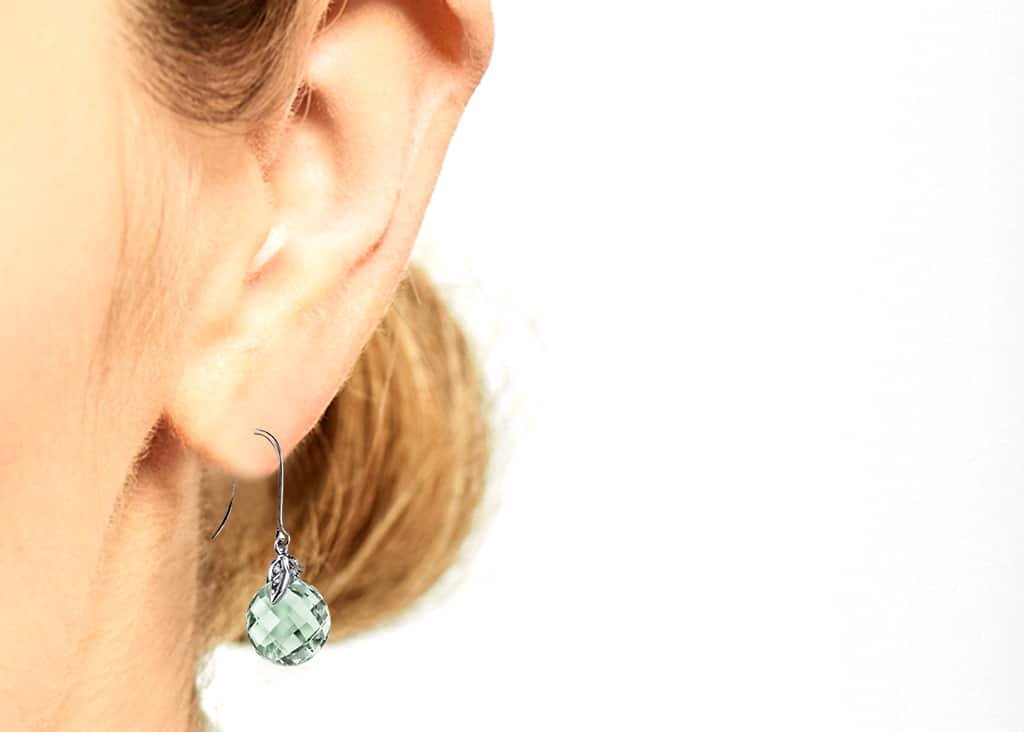 Whether you want to offer a unique gemstone as a present or want to deal with one of the rare stones, Green amethyst can be an excellent idea. Also known as Prasiolite, Vermarine, or Green Quartz, this stone has a lovely light green color that adds a touch of elegance to any jewelry piece. For millennia, people have been fascinated by green amethysts, not just thanks to their understated elegance, but also thanks to their spiritual energy and healing effects on body and soul.

The term “green amethyst” is a misnomer. It occurs extremely rarely in nature, and most stones are obtained by heat-treating amethyst, which turns from purple to green – hence the name.

Where does green amethyst come from?

Naturally occurring green amethysts is very rare. It used to be mined in Brazil, Poland, and Canada, but, as of February 2019, the only remaining natural mine is the one in Brazil. Most green amethyst is obtained by applying heat treatment and ionizing radiation to amethysts. Jewelry featuring this gemstone is trendy because it looks just as sophisticated as more expensive stones, such as emeralds.

Prasiolite is available in a spectrum of green shades, from translucent to dark green and, apart from being one of the most beautiful gemstones, it can have healing properties. You can purchase green amethysts as loose stones or as part of jewelry items.

Soldiers would also wear them to battle because it was believed they had protective properties and guarded them against harm.

Green Amethyst As A Healing Power

Prasiolite has the same spiritual properties as amethyst, which, if you’re familiar with gemstones, you’ll know, is famous for its healing powers.

A Stone of Sobriety

•  Green amethyst used to be known as “a stone of sobriety.” it has cleansing properties and also helped wearers to free themselves from physical addictions and toxic relations.” In Greek, amethystos means “not drunk” or “remedy against drunkenness.” Soldiers in ancient Greece would add these stones to their goblets to avoid becoming intoxicated from alcohol.

In ancient times, rich aristocrats preferring to remain sober said they had drinks or goblets made of Amethyst. They may be able to serve water for their guests, when drinking wine, as the dark purple color of the gem obscured the color of the drink, thereby making the aristocrat appear part of the tipple. In the past, it was believed that you should mix the Amethyst crushed into a drink if you wanted to save a drunkard from delirium.

Eventually, Prasiolite helps to restore the soul to its rightful position as the core of your human existence and makes your dream of your heart possible: to see the perfecting of the spirit inside through person despite human faults and shortcomings. It’s the most profound tragedy of the wise.

It’s mentioned in The Bible

Amethyst, as one of the twelve rocks representing the 12 tribes of Israel, is mentioned in the Old Testament and was also one of the 12 gemstones adorning the lamb of High Priest Aaron (Exodus 39). Amethyst was created and worn by cardinals and priests of the Catholic Church from the mid-age. It has a connection with harmony and celibacy. Over the years, the gem was also associated with royalty, and numerous parts can be found in the British Crown Jewels along with its use by the Church .. Amethyst also was regarded as Catherine the Great’s favorite.

•  Wearing Prasiolite is said to optimize the activity of endocrine glands.

•  Relieve stress naturally and get rid of self-sabotaging thoughts

Crystals for Grief: A Guide for Healing

•  In the past, writers, artists, and philosophers would surround themselves with green amethyst stones to achieve creativity and enlightenment.

•  Helps the wearer avoid conflicts and gain clarity in their thoughts

Naturally occurring green amethysts is very rare. It used to be mined in Brazil, Poland, and Canada, but, as of February 2019, the only remaining natural mine is the one in Brazil.

A long time ago, green amethyst used to be associated with nobility and high social status. Because it occurred so rarely naturally, only royalty could afford to have it, and people believed that wearing the beautiful green gemstones would bring fortune and wealth. Nowadays, you don’t have to spend a small fortune to add a dazzling green amethyst to your collection. Green amethysts are natural to find. You can purchase it in the form of loose gemstones or a jewelry set. You can see for yourself why people have been fascinated with this stone since ancient times.

How to Use Green Amethyst (Prasiolite)

The best way of wearing Prasiolite is to be used as a diamond. Wearing this durable stone keeps its energy close to your auric field and lets you feel its many advantages. The necklace or earrings it stays close to your eyes, the third eye and the heart chakras, but it can be useful anywhere.

If you have Prasiolite, which has been synthesized through heat treatment, it must be treated with care. Shield it from direct sunlight and excessive heat, as the color will decay. If you do not wear Prasiolite jewelry, it’s safer to keep it in the dark — in a jar, cabinet, or box. Do not store it near a heat source like a fireplace or a stove.